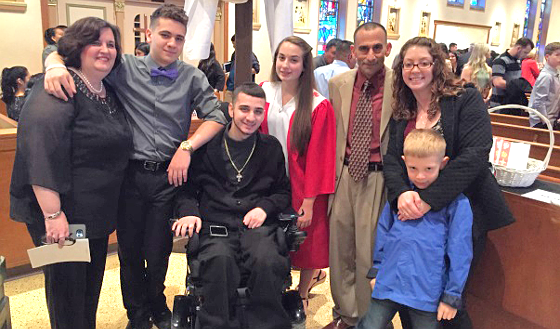 Michael Nichols was serverely injured during a hockey game, but still looks to the game as well as his BAYADA caregivers for strength and hope.

September is National Spinal Cord Injury (SCI) Month. When assistive care client Michael “Mikey” Nichols of New Brunswick, NJ sustained a spinal cord injury at the age of 18, he had to reimagine what his life would look like in a big way.

With perseverance and an amazing support system, Mikey has not only reimagined his life, he’s thriving in it.

I was a normal kid. I loved sports growing up, and played baseball, basketball, football, and—my favorite—ice hockey. Sean Avery of the New York Rangers was my favorite hockey player. He wasn’t popular among hockey fans, but I liked him because he’s kind of like me; small in stature with no fear.

Can you tell us about  your accident?

It happened in January 2014 during a high school ice hockey game. I was checked from behind—an accident that resulted in a fractured C5 vertebrae. I remember the entire incident; I felt immediately numb. As the accident happened, I suddenly thought of Minnesota high school ice hockey player Matt Olsen and Rutgers football player Eric LeGrand, both of whom were paralyzed while playing their sport. My coach was by my side right away. When he asked me if I was okay, I said, “I’m fine. I just can’t move.”

I laid on the ice for 20 minutes before being air-lifted to a local hospital. When my mom came to the ER, I told her I was fine and would be back in time for our next game.

Although I remember the accident in detail, the following six-and-a-half weeks are a blur.

I spent five months in the hospital, and then in rehab. While in the hospital, I suffered a stroke that—combined with the accident—left me unable to use my arms as well as being dependent on a ventilator.

On April 28, 2014, I was taken off the ventilator. It was one of the scariest moments because I didn’t know if my body would start breathing. Fortunately, after two hours, I started breathing normally on my own.

I used a lot of things in rehab that I learned from ice hockey. Dedication, persistence, and a never-give-up attitude played a vital role in my healing process.

Soon, I was able to move my left wrist and had some arm movement, but my right arm is still paralyzed. Doctors say I may or may not move it again, only time will tell. I left rehab with a motorized wheelchair, feeling as independent as I could possibly be.

The day after I came home, I went to my senior prom. It was the first time I saw my classmates after the accident. It was memorable. That weekend I went with a group of friends to Wildwood, NJ for senior week. My dad went along and stayed in a separate room. He was there when I needed him to make sure I was okay. Together, my dad and my friends carried me up the six flights of stairs to our rooms. I still had a great time.

I am studying sports communications in college right now. I have big plans for the future, and hope to go into sports radio. You sit on your butt and talk sports all day long. It’s perfect.

I also receive16 hours of nursing services each day.

I recently got a tattoo that says, “We all got angels. We all got demons.” BAYADA LPNs Sherrell Taylor and Carla Haynes-Siglam are my angels. They take amazing care of me, point out anything that I shouldn’t be doing, and encourage me to take important steps. They’ve adopted me into their family. I couldn’t do it without them.”

Do you have any life rules that you live by?

Jimmy Valvano—a basketball player, coach, and broadcaster who passed away in 1993 from cancer—once said, “If you laugh, you think, and you cry, that’s a full day. That’s a heck of a day. You do that seven days a week, you’re going to have something special.”

I follow his advice. I try to smile and laugh, and am brought to tears from both at least once every day—and that is living to me. I have yet to meet a person with a spinal cord injury that couldn’t do all three things.

Do you have any advice for others facing a spinal cord injury?

The BAYADAbility Rehab Solutions program has been instrumental in keeping Nichol safe at home. His care team is specially trained to keep him healthy and out of the hospital so he can keep up with the demands of a college-aged student.