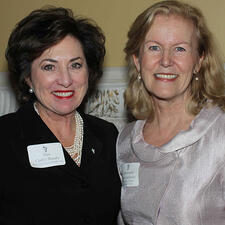 BAYADA Home Health Care Director Ann Baiada, RN, CRRN, (pictured left) received the Uachtarán Award from the Irish American Business Chamber & Network (IABCN) at the 2014 Ambassador Awards, hosted at the Hyatt at the Bellevue in Philadelphia. Anne Anderson (pictured right), the Ambassador of Ireland to the United States, and more than 400 people watched as the IABCN recognized Baiada as a person of Irish descent who has made a significant civic contribution.

"Ann Claffey Baiada was chosen for the 2014 Uachtarán Award because she personifies the qualities for which our Irish presidents are admired, including her dedication to and support of education,” said William J. McLaughlin, Jr., founder and chairman of the IABCN. “The fortitude she has shown in cultivating educational ideas that are now flourishing is truly a gift from an Irish-American woman. Her work has impacted so many.”

Baiada’s unwavering commitment to improve skills through evaluation, education, and training, motivated her to create new training and mentoring programs at BAYADA. Her passion for nursing and her ability to empower and inspire led to the establishment of an award in her honor, the Ann Baiada Award for Excellence in Nursing Leadership, and the development of the Ann Baiada Center for Clinical Excellence.

She passionately supports local educational organizations, including Mercy Vocational High School in Philadelphia and Sacred Heart School in Camden. She is a trustee at Neumann University in Aston, and a past co-chair of the University of the Arts Parents Council in Philadelphia.

Baiada, a Donegal descendant from Kilmacrenan, grew up in a predominantly Irish community in Philadelphia with a strong sense of family. “For the kids in the neighborhood, it was like we had many mothers,” she said. “Their lesson to us was simple: take care of each other. Life is not all about you, but how you live your life for others.”

Her compassion, generosity, and personal sense of responsibility have been recognized through various honors, including the Irish Education 100 award from the Irish Voice in 2014, the Richard J. Hughes Humanitarian Award from Catholic Charities, Diocese of Trenton in 2013, the Citizen of the Year Award from the Moorestown Service Council in 2009, the Work of Mercy Award from Mercy Vocational High School in 2006, the Howard Fiala Service Above Self Award from Moorestown Rotary Club in 2006, and the Light of Hope Award from Catholic Charities in 2005.