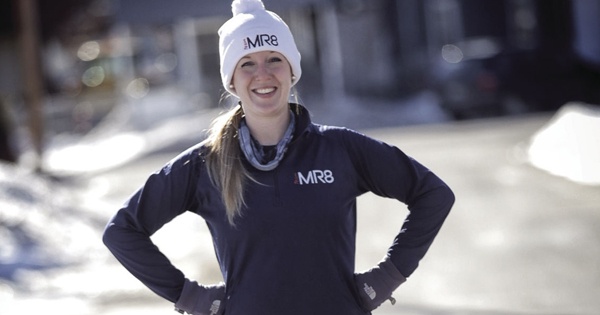 BAYADA Hospice Client Services Manager Cassie Cyr received an early Christmas present when she answered the phone on Christmas Eve and found out she earned a Boston Marathon race bib and a coveted slot on Team MR8. The team runs to raise funds for the Martin Richard Foundation, a not-for-profit organization named after eight-year-old Martin, who was the youngest fatality at the Boston Marathon bombing in 2013.

Cyr, who works in the organization’s Brattleboro, VT office, has two goals that she works at diligently as the April 16 race approaches. The first is physically training to run 26.2 miles in her second marathon (her first Boston Marathon). The other is closer to the heart – raising a minimum of $7,500 for the Martin Richard Foundation. The foundation keeps Martin’s spirit of love and peace alive by providing programs that promote inclusiveness for children and adults, both in sports and social circles.

When speaking to The Keene Sentinel recently, Cyr shared her reason for wanting to support the foundation: “Everything the foundation stands for, I stand for,” Cyr said, explaining why this effort means so much to her. “The theme is inclusion — opportunity for everyone.” Her efforts clearly exemplify her commitment to the organization’s mission - The BAYADA Way – which states that BAYADA believes in “providing community service where we live and work.”

With just about three months to go, Cassie has reached about 17% of her goal, with a number of raffles and fundraising events in the works. You can contribute to Cassie’s dream of running the Boston Marathon and supporting an incredibly worthy cause by visiting her individual Team MR8 fundraising page.