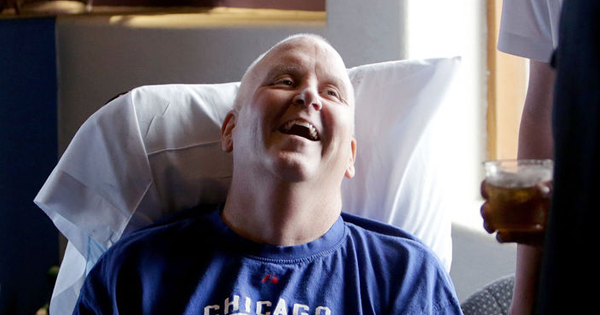 In early March 2017, 48 year-old Pat Connors, a prominent restauranteur in Tucson, AZ, knew he wanted a joyful celebration of his life—not a typical sad funeral—as he faced the end stages of stage-4 lung cancer. And he wanted to be there for it, too. He desired an “awake wake,” as he called it, to say goodbye to his family, friends, coworkers, and neighbors at the restaurant he owned.

While he was at Tucson Medical Center’s hospice facility’s Peppi’s House during his last weeks of life, Connors told the center of his wishes. They immediately called BAYADA’s Tucson Adult Nursing office for assistance. BAYADA Nurse Peg Candler, RN, who has been working with hospice patients for eight years, went right to the center to meet Connors and discuss his plans. She couldn’t help but be touched by his upbeat personality and zest for life.

“One of his family members asked if this party was a good idea,” says Candler. “I was concerned about his endurance and how we were going to pull this off. But he had so many people he wanted to say goodbye to, that we had to make it work.”

As part of preparation for the party, Candler met with Connor’s physician to discuss pain control for the big day. She brought medication to administer to him during the event, coordinated the transportation to and from, and made sure he was transferred easily and safely into his wheelchair with oxygen. She also dressed as a guest so she fit in with the rest of the crowd.

The party was everything Connors hoped for—a happy event filled with laughs and smiles instead of tears, and lots of good food. About 40 restaurants from the area contributed food, a bounty that lasted for hours.

“I was so proud of him,” said Candler. “He lasted for seven hours as the host. At one point I asked him if he was ready to go, and he said the line was too long. He had to make sure he saw all of the people there for him.”

Connors passed away several days later. “It was such a privilege to have been the person who cared for and comforted him during those final days and at his special party,” said Candler, attempting to hold back tears. “I’m sorry for getting so emotional. I guess it’s my own way of honoring him.”