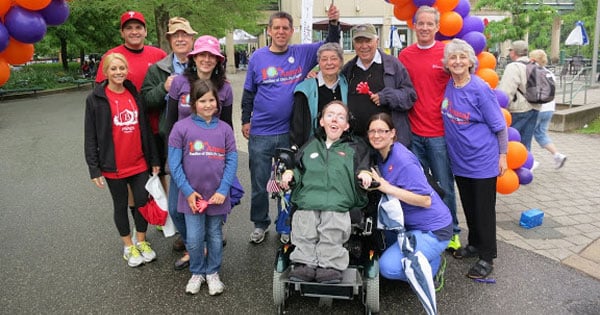 BAYADA staff, clients, and their families participate in the Cure SMA Walk-N-Roll

In September, 1997, Tara and Jim Montague were thrilled  to welcome their daughter Mary to the world. However, when they brought their baby home, the couple noticed she was not meeting her developmental milestones. After numerous tests and doctor visits, Mary and Jim received news no parent wants to hear. Their precious daughter was diagnosed with a rare genetic condition called cerebrocostomandibular syndrome, characterized by malformations of the mouth, jaw, and tongue and abnormal development of the ribs.

As their daughter grew, new symptoms emerged, and they suspected that an additional medical condition was the cause. Sure enough, when Mary was 8, a neurologist confirmed the couple’s worst fears. Ttheir daughter had spinal muscular atrophy (SMA), an inherited disease that destroys the nerves controlling voluntary muscle movement, which affects crawling, walking, head and neck control, and even swallowing.

To enhance nursing care at home for Mary and the hundreds of patients with SMA, BAYADA Pediatrics, a BAYADA Home Health Care specialty practice, is proud to announce its 6th year of partnership as a national sponsor of Cure SMA. The non-profit organization is dedicated to supporting families affected by the disease and funding research for new treatments and, eventually, a cure.

“I am proud that we have renewed our partnership with Cure SMA, an organization that shares our commitment to improving the quality of life for these patients,” said BAYADA Pediatrics Practice President David Baiada. “Throughout our six year relationship, clinical experts with BAYADA and Cure SMA have developed training programs to ensure nurses are providing the most advanced care possible to children with the disease. I look forward to continuing our ongoing clinical collaboration.”

In fact, according to Cure SMA President Kenneth Hobby, over three decades of research have led to a better understanding of the SMA disease process, but have not yielded effective treatment options, until now. In clinical trials, patients treated with a drug called SPINRAZA™ experienced meaningful improvement in motor function compared to untreated study participants. Based on the successful clinical trials, the Food and Drug Administration (FDA) recently approved SPINRAZA as a treatment for SMA in pediatric and adult patients.

“The recent approval of SPINRAZA as the first therapy ever for SMA has launched our community into a new stage of treatment and care,” said Hobby. “As the new drug shows promise for increased survival rates and improved motor function, care will evolve from treating SMA as a terminal illness to treating it as a chronic disease. As our patients live longer it will be even more important for them to have quality nursing care at home to help them manage their condition. That’s why we are delighted to have BAYADA back for a sixth year of partnership, and we are grateful for their support of the SMA community.”

BAYADA Pediatrics provides nursing care in the home and in school for children with a wide range of diagnoses from birth through adolescence.  Nurses who care for children with SMA also have the opportunity to participate in a diagnosis-specific training that focuses on clinical care, facility-centered care, and support dynamics. In addition, nurses receive extensive education on caring for children who require a tracheostomy and ventilator for breathing.