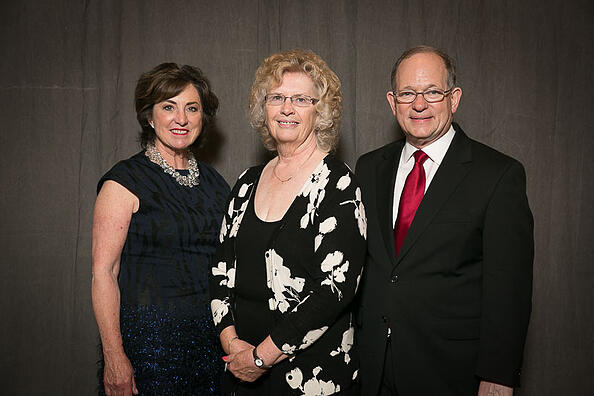 Camp Hill, PA resident and Home Health Aide (HHA) Judy Morrison (pictured, with Ann and Mark Baiada) was recognized as the national HHA Hero of the Year by BAYADA Home Health Care. The care and support she provided to a young woman after a devastating car accident helped the woman progress from being bedridden to working a part-time job. Morrison’s family, patient, and patient’s family watched as she was honored for exemplifying the highest standards of care before more than 1,800 employees at the annual awards meeting in Hershey, PA on Saturday, June 8.


For the past seven years, Morrison has cared for Liz Ellis after a car accident left her in a coma and caused a stroke. After returning home from the hospital, Ellis was confused and could not understand why she could not perform simple daily tasks that seemed effortless before the accident. Eating, walking, and talking were now insurmountable challenges that overwhelmed her.

“Judy has been the key component in Liz’s recovery,” said Ellis’ mother Jackie. “When Liz was very hesitant to work with some of the therapists, Judy was there and insisted, ‘You will do this.’ And she did it.” Morrison recognized that the multidisciplinary team was critical to Ellis’ recovery.

“With Judy’s help,” Ellis added, “I stopped pitying myself.” Traumatic brain injury can have wide-ranging psychological and physical effects, with some symptoms appearing immediately and others appearing days or weeks later. Morrison committed herself to reading about the social, emotional, and behavioral complexities that often accompany a traumatic brain injury so she could understand the frustration that Liz was experiencing.

“It’s not easy,” declared Ellis’ mother. “But the relationship between Judy and Liz is phenomenal. Liz can talk to her. She can confide in her. It’s very close to what Liz and I have, and there isn’t anything more beautiful than that.”

Ellis’ initial prognosis was discouraging. However, Morrison inspired hope and gave her the push she needed to continue on her path to recovery. “She went from being bedridden to walking to volunteering to working a part-time job,” Morrison said. “Seeing her progress to where she is now is the greatest gift for me.”

In her own words, Morrison was “flabbergasted” to be selected for the honor from among more than10,000 HHAs. “I started crying and I didn’t know what to say,” she shared. “I was amazed that I was receiving this award because I love my job, I love my clients, and I feel that helping people is my reward. I’ve worked for many companies and this is the first time anyone has ever, ever showered me with all of this wonderful thanks.”

Established in 1999, the Hero on the Home Front Program recognizes care professionals who consistently demonstrate the BAYADA core values of compassion, excellence, and reliability. Each quarter, local heroes are nominated by their clients and peers, and the award recipients are honored in a local celebration. From the local heroes, division heroes are chosen. And finally, one national hero is selected for four disciplines and each of the four is recognized at the annual awards ceremony.

Cathy Benfer, director of the BAYADA office from which Morrison works, shared, “Judy’s compassion and commitment to excellence are as equally impressive as her reliability. Judy started with BAYADA in July of 2005 and has never called out for a shift.”

As Ellis continues with her recovery, she feels a sense of hope and encouragement from Morrison and a bond that is undeniable. “Judy makes me feel like I can conquer anything,” she declared. “I’m so glad she came into my life.”