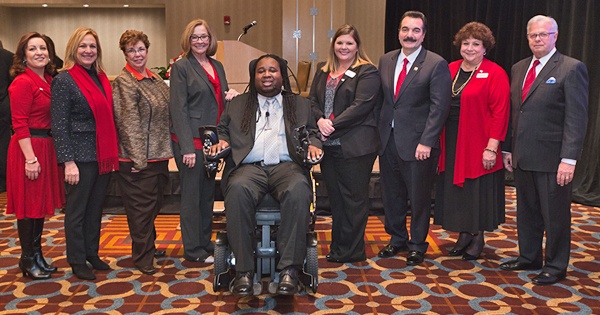 Eric LeGrand, a former Rutgers University football star and BAYADA client who lives with quadriplegia from a spinal cord injury experienced during a 2010 game, served as the keynote speaker during the third annual BAYADA Home Health Care Champion Awards. The event paid tribute to Assembly Speaker Vincent Prieto of the 32nd Legislative District, Assemblywoman Valerie Vainieri Huttle of the 37th Legislative District, and Jean Alan Bestafka, past president and CEO of the Home Health Services Association (HHSA), for their outstanding dedication to home health care advocacy.

“I’ve learned so much over the last five years,” LeGrand told the audience of over 100 who had gathered at the Heldrich Hotel in New Brunswick on December 1. “People ask me how I stay so motivated, and it’s really the people around me wishing me well. I can’t do this alone. I know with all your support I will walk again, and I’ll continue to make a difference supporting others to never give up.” LeGrand's charitable organization, Team LeGrand of the Christopher and Dana Reeve Foundation, seeks to find a cure for paralysis.

Speaker Prieto, who supported a successful budget resolution to increase the Medicaid reimbursement rates for home health aides, thanked BAYADA for opening his eyes to the critical role caregivers play in helping people in need remain in their homes. “It is so important to take care of the people who take care of the most vulnerable in our state. You inspired and helped me understand what an incredible service this is, and you have a friend and advocate in me to help however I can.”

Assemblywoman Huttle was named a Champion thanks to the critical role she played in passing legislation requiring managed care companies to report their intent to reduce Medicaid reimbursement rates to the Department of Human Services. She shared that her mother received care from BAYADA, giving her an intimate perspective on the value of home care services. “We rely on you and want people in the home who are professional and compassionate, and treat our parents with dignity. I know BAYADA is the gold standard, and I am honored to continue supporting the work you do.”

Jean Alan Bestafka, who was instrumental in the development of some of the first home care safety standards and regulations in New Jersey, reminded everyone that, “What we do and how we do it is so important because it’s people’s lives we’re supporting, and it’s why I’ve been so insanely dedicated to home health care advocacy.”

BAYADA Chief Marketing and Government Affairs Officer David J. Totaro concluded the evening by underscoring the need for continued advocacy efforts to spread the message of the enormous value that home health care brings—both financially for the state and in quality of life for consumers and their families.