When BAYADA Habilitation client Amy Neubauer took her place among thousands of runners at the start to the 2015 Quintiles Wrightsville, NC Beach Marathon, she met the challenge with the same grit and determination she has had to muster most of her life.

Her dream is to raise funds to build a handicap-accessible home.

For Amy, the 26-mile marathon symbolically represented the 26 difficult years that have passed since, at age 14, she was struck by a car while riding her bike. The accident left her with a spinal cord injury, resulting in quadriplegia and traumatic brain injury.

Over the next eight years, Amy was repeatedly admitted to hospitals, rehab facilities, foster homes, nursing homes, and a preparatory school for low-functioning adolescents, yet none were equipped to provide the care she required.  Robbed of the use of her arms and legs, Amy still wanted to be her own advocate and live independently.  Thanks to her perseverance, she received government funding for her own, albeit tiny, apartment, where she has lived for the past 18 years. 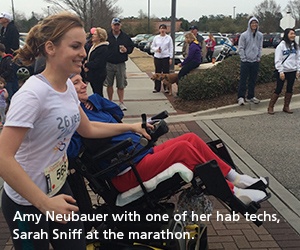 Amy’s caregivers from BAYADA, called habilitation technicians (Hab Tech), help her with activities of daily living and getting out into the community to shop, socialize, or go to church.  One of Amy’s hab techs, Sarah Sniff, has become more than a caregiver, she has become a close friend.

“One night I asked Amy, if you could walk again, what would be the first thing you would do,” shared Sarah.  “Amy didn’t hesitate with her response. She said that she wouldn’t walk at first, she would just run and run and run!”

Sarah, an avid runner herself, understood Amy’s sentiments all too well. “I had always wanted to complete a marathon, and suggested we do it together!” she said.

Several months later on a chilly weekend morning, the two women, clad in official race t-shirts, took their rightful place on the starting line. Sarah, who had trained for months, kept pace alongside Amy, who used the limited mobility in her right arm to power her electric wheelchair through the streets of scenic southern communities.

Throughout the marathon their fellow runners, inspired by Amy’s story, shouted words of encouragement, giving the two friends the inspiration to go on.

“It was so much fun, the entire day was so uplifting!” reminisced Amy.  “Sarah and I made each other laugh and we kept each other going. I am so grateful to her for hanging in there with me.”

Amy, whose spinal cord injury affects the way her body regulates temperature, had a difficult time handling the cold weather during the race.  Increasing pain in her shoulders and back led to the decision to end their marathon run early after going an impressive 13.1 miles.  Sarah also stopped at 13.1 miles, putting her concern and affection for Amy above her dreams of finishing the race.  But even though they did not cross the official finish line, participating in the event strengthened the relationship that started as caregiver and client and evolved into the deep bonds of friendship.

“We want to do it again next year!” proclaimed Amy.

The marathon also gave Amy a chance to raise awareness of her longstanding dream:  to move into a home that is better equipped to meet her physical challenges.

“Amy’s apartment is only about 650 square feet, it’s really tiny,” said Julie Westholder, director of the BAYADA Habilitation office in Wilmington, NC that provides personal care assistance for Amy.  “She barely has room to rotate her wheelchair in the kitchen and bedroom, and in the bathroom she can’t even see the mirror.”

Amy has started a website to raise the funds needed to build her own handicap-accessible home.  “I am not asking for anything extravagant, just something that would be more accommodating,” she said. “I do not want to be forced into a nursing home or institution that would take away my rights and freedoms, as well as my independence again.

To learn more about supporting Amy’s dream of a living in a handicap-accessible home, visit her personal page at: http://www.youcaring.com/help-a-neighbor/home-sweet-home/199812