When BAYADA Habilitation Director Shaun Sullivan learned that client Kirk Herbertson, who has Asperger syndrome, had announced his candidacy for a seat on the Board of Education of Lincoln County, NC, he was pleased and supportive, but certainly not surprised. After all, Kirk, 49, has never let his diagnosis hold him back. In fact, he draws strength from it.

An Inspiration for People with Special Needs

During his campaign, Kirk openly shared his Asperger syndrome diagnosis with prospective voters, an acknowledgement that overwhelmingly yielded positive responses. “People told me they were proud,” he said.

Indeed, that pride carried Kirk through the election and across the finish line, where he emerged victorious. As the district’s newest board member, he hopes to address parent concerns about the Individualized Education Program (IEP), a federally mandated, legally binding document created by schools to address the unique learning issues and education goals of students with special needs. Kirk also wants the district to hire enough teachers to ensure special needs students get the attention they deserve. In addition, he supports increased funding for choir and band programs.

“Kirk is intelligent, personable, and a really cool guy,” said Shaun. “He is involved in so many things, he knows everybody and everybody knows him. It’s no surprise that he won the election.” 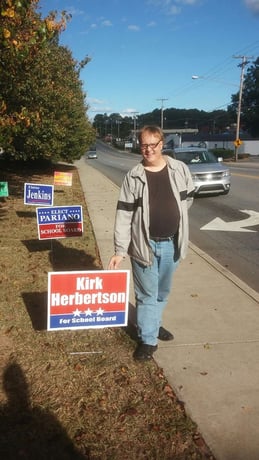 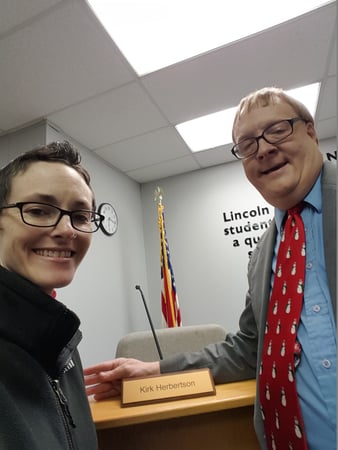 As a volunteer photographer for the Lincoln Herald newspaper, Kirk has become a familiar face at local sporting events, fairs, festivals, parades, and concerts. A gifted musician, Kirk also plays the organ for his church, acts in local theater, and sings with the downtown carolers. What’s more, he has been invited to be a guest speaker at an Autism Society conference in Charlotte, NC.

“He is so compassionate, he cares about everybody. He doesn’t see anything negative in anyone,” said Habilitation Technician Mandy Owensby, who works with Kirk. “I wake up happy to go to work because I enjoy Kirk so much. He brightens my days. I’ve never seen him in a bad mood. He is a very special person to me.”

Asperger syndrome is considered to be on the high functioning end of the autism spectrum. Affected people can have difficulty with social interactions and exhibit repetitive behaviors. Motor development may be delayed, leading to clumsiness or uncoordinated motor movements. However, those with Asperger syndrome do not have significant delays or difficulties in language or cognitive development.

Thanks to Mandy’s care, Kirk is able to live independently in his own apartment. She helps him with grooming and dressing and with individual skills-building to learn routine tasks such as taking out the trash, caring for his eye glasses, and showering according to schedule. Kirk also struggles with hoarding, so Mandy is on hand to ensure there are no fire or safety hazards in the apartment.

“Kirk has a sensory disorder and can’t taste when food has gone bad,” shared Mandy. “He has gotten food poisoning in the past, so I help him prepare meals and throw away food that has spoiled.”

Mandy’s support also carried over to the campaign. She handed out flyers, accompanied him to events, and told everyone she knew to vote for him. “The day of the election, Kirk texted me each time a precinct sent in their numbers,” she said. “When he found out he won, he was so happy he cried. A few days later we went to the Veteran’s Day Parade, and nothing warms your heart more than to see every car stop, with drivers congratulating him.”

When asked what advice he would give to parents of a child on the autism spectrum, Kirk shared, “I would tell a mom or dad that their child can overcome things…because I did. I credit God, my parents, and my sister. I have a great family and great friends, and people like Mandy who help me succeed.”

Habilitation services helps people with intellectual and developmental disabilities to live safely at home and participate in their communities with comfort, independence, and dignity.