Veteran's Day - A Lesson in History From One Soldier To Another

Before the US Air Force, there was the US Army Air Corps. It was a different time back then, when Stewart served our country during World War II. There were mandatory drafts; there was a different ranking system. He was a radio-gunner in a B-25 that couldn’t breach 12,000 feet for lack of oxygen. There are a lot of differences between then and now, but what’s most striking are the similarities. And those similarities become all the more apparent when two veterans sit in the same room and talk. Stories are swapped. Perspectives are offered. We’ll tell you what—when history springs from the textbook, when it’s living and breathing and speaking—you’ve got to listen. So that’s what we did. 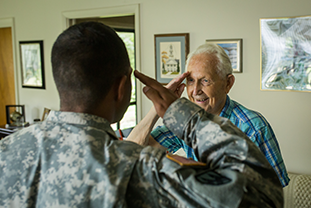 It was Adrian’s second visit to Stewart and his wife Mary’s house. He doesn’t work for BAYADA, though his fiancé does—she’s a volunteer coordinator at the office from which Stewart receives hospice care. Stewart is living with progressive colon cancer and receives nursing care to help keep him comfortable and pain-free. Adrian volunteers his time, and it seems like he gets as much out of it as Stewart does. He wants to hear all the stories about the war, about being deployed in Corsica; but he also likes the ones that stay a bit closer to home. Like the time Stewart’s grandkids took him to an air show at the base over in Redding. There were reenactments and people dressed as captains and majors, who received on-the-spot corrections from Stewart: “You got a button unbuttoned there, Soldier.” There were planes—B-25s with the cockpit open—that you could sit in for five bucks. Stewart chuckled to himself. “I said, ‘Jesus, I flew 70 missions in a plane like that, and they’re going to charge me admission?’”

Stewart served in the Air Corps for a little over two years. He rose through the ranks from private to tech-sergeant and graduated—still in the reserves—as a second lieutenant from veterinary school. He was stationed primarily on Corsica, which is where he completed 70 missions. He’s still got the scrapbook detailing them: his crew that day—which was never the same—and how long they were in flight and whether they could even see the target well enough to drop the bombs at all. He explained the layout of the plane, described the jobs of the six men working within, and recalled one man who had to—multiple times—manually drop the bombs out of the plane. He 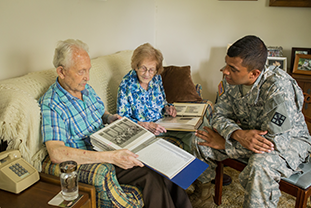 joked, “Yeah, the guys said, ‘Well, he’s too dumb to get scared.’” After his time was up, he returned home by sea, washing dishes on a ship jammed full of soldiers. In order to fit everyone, bunks were directly next to each other. Privacy was hanging a towel from a rope, so that, at the very least, you couldn’t see all of the stranger next to whom you were sleeping.

Growing up on a farm taking care of chickens in the hatchery planted the seed in Stewart’s head, but getting out of the service around the same time the GI Bill was introduced made veterinary school possible. “I didn’t realize that it was so competitive,” he explained. “There were over 800 applicants, and they only took, I think 50.” And Stewart was a successful veterinarian—even a little famous. Trigger, the palomino horse owned and ridden by Roy Rogers, was at a nearby county fair in September of 1962. He had gotten sick, and Stewart was called on to treat him—and he did for four straight days until the horse was feeling better. “I guess, as far as the veterinary stuff was concerned, half of my life was from the back end to the front end,” Stewart said, pointing to a photo of Trigger in one of his albums. “Cause that was Trigger’s problem. He was having a bowel problem.” Adrian laughed. “Not a good problem to have." Stewart and Mary have been together since they graduated high school. They were in the same class; Mary was Valedictorian. Stewart couldn’t remember his exact rank, but he took a stab at it. “Probably if we had 54 in our class, I was 53.”

Mary and Stewart are 93 years old, sharp as all get out, and still very much in love. It was a heartening thing to witness, the way each of their narratives weaved throughout the other and the small, gentle moments they shared in our presences. After Stewart graduated from veterinary school, they built a small cabin with the help of his dad. It was on an acre of land 90 miles outside Ithaca, NY that they 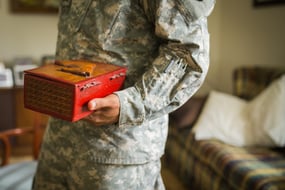 bought for $100. They showed us the yellowing picture and then a similar one, which looked more recent than the first. “Twenty years later?” Mary guessed. Every once in awhile, they like to visit and see if it’s still there—it still is. They’ve built another one—same size—at the end of their lane. They don’t have to travel as far to see their first home together anymore.

“You always had a lot of free time on your hands,” Stewart said as Adrian handed him the box. “You just—you just did something. I don’t know what other guys did, but I used to carve like this.” From an old cigar box, Stewart used a pocket-knife to carve the horse and the intricate grooves in the sides. He made the hinges from pieces of tin and used tools borrowed from a few guys in the ground crew. Mary cleared her throat. “He wrote home for me to send him a picture of a horse. Well, did you ever look through magazines looking for a picture of a horse?” “Can’t say that I have,” Adrian replied, shaking his head. “I couldn’t find any. So he had to draw the horse from memory."